Why Is A Breast Biopsy Performed? 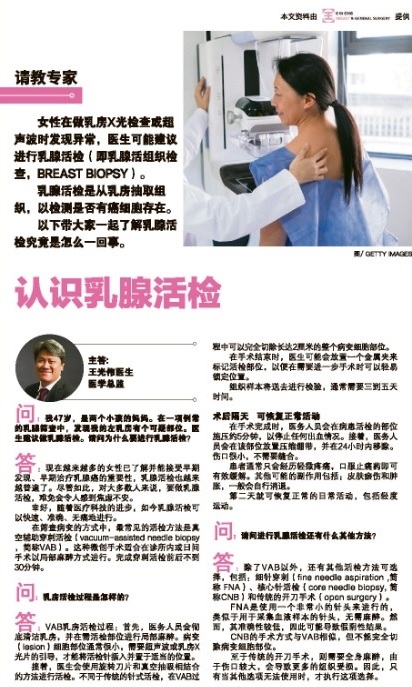 A suspicious area was detected in the breast on routine breast screening. The doctor recommended a breast biopsy as the next step. What are the types of breast biopsy and risks involved? What can you expect before and after a breast biopsy?

Nowadays, this is a very common scenario as more women understand and accept the importance of early detection and treatment of breast cancer. Nonetheless, it remains an anxious and unsettling time for most. Thankfully, with improved techniques, a breast biopsy can be done in a quick, accurate and painless way.

The commonest method of biopsy for screen detected lesions is known as vacuum-assisted needle biopsy (VAB). This minimally invasive procedure can be performed in the clinic or as day surgery under local anaesthesia. It takes less than 30 minutes to complete the needle biopsy.

The breast is first thoroughly cleaned and local anaesthetic is given to numb the area to be biopsied. As the lesion is usually very small, guidance with either a ultrasound or mammogram is necessary. The biopsy needle is then inserted and placed at the appropriate position. The biopsy is then carried out using a combination of a rotating blade and vacuum aspiration. Unlike traditional forms of needle biopsy, the entire lesion up to 2cm can removed completely during a VAB. At the end of the procedure, a metallic clip may be placed to mark the biopsy area so that it can be easily identified in the future should further surgery be needed. The tissue samples are then sent for histological diagnosis, which usually takes between 3 to 5 days.

Upon completion of the procedure, the biopsy site is manually compressed for about 5 minutes to stop any bleeding. A compression bandage is then placed which is removed within 24 hours. No stitching is required as the wound is very small. The patient will typically only experience mild pain which is effectively relieved by oral painkillers. Other possible side effects include skin bruising and swelling which usually resolves on their own. Normal daily activities including light exercises can be resumed on the day after.

Other than VAB, alternative biopsy methods are available. These include fine needle aspiration (FNA), core needle biopsy (CNB) and open surgery. FNA is done using a very small needle similar to that used for taking blood samples. It does not require any anaesthesia. However, its accuracy is lower and hence may result in false negative results. CNB is performed in a similar fashion to VAB, but it is unable to remove the entire lesion. Finally, open surgery requires general anaesthesia, a large wound and results in more tissue damage. It is hence only performed if other options are not available.

Article was published on Lian He Zaobao on 14 September 2021.